A common misconception I’ve seen while talking to people in the node ecosystem is that a module’s “reach” is contained to the context it is used in. This is not the case. Every single module you import, if turned malicious, can affect any other module that you depend on.

To demonstrate this concept, I’ve created the module multiply-by-two. This module contains a syncronous function which returns the provided number multiplied by two. Additionally, if you use express and Stripe, it will capture your users’ credit card details via an injected XSS attack.

Anatomy of an attack

In our example, we will just display the user’s credit card information in an alert dialogue. A real exploitation of this would certainly do something more nefarious, such as POST the number, CVC, and expiry information to a remote server that the attacker controls.

I’ve built a web application forked from node-stripe-membership-saas, an example repository demonstrating how to build a node application with Stripe, which has a modified route that returns a number multiplied by two. It’s not important that it’s in a route, just that the module is imported somewhere. The malicious module looks like the following:

In addition to providing the multiplication function, this loads express in the context of the parent package and wraps a core library function to inject a script tag into any given response. The script tag contains malicious Javascript which is executed by the browser as an IEFE. 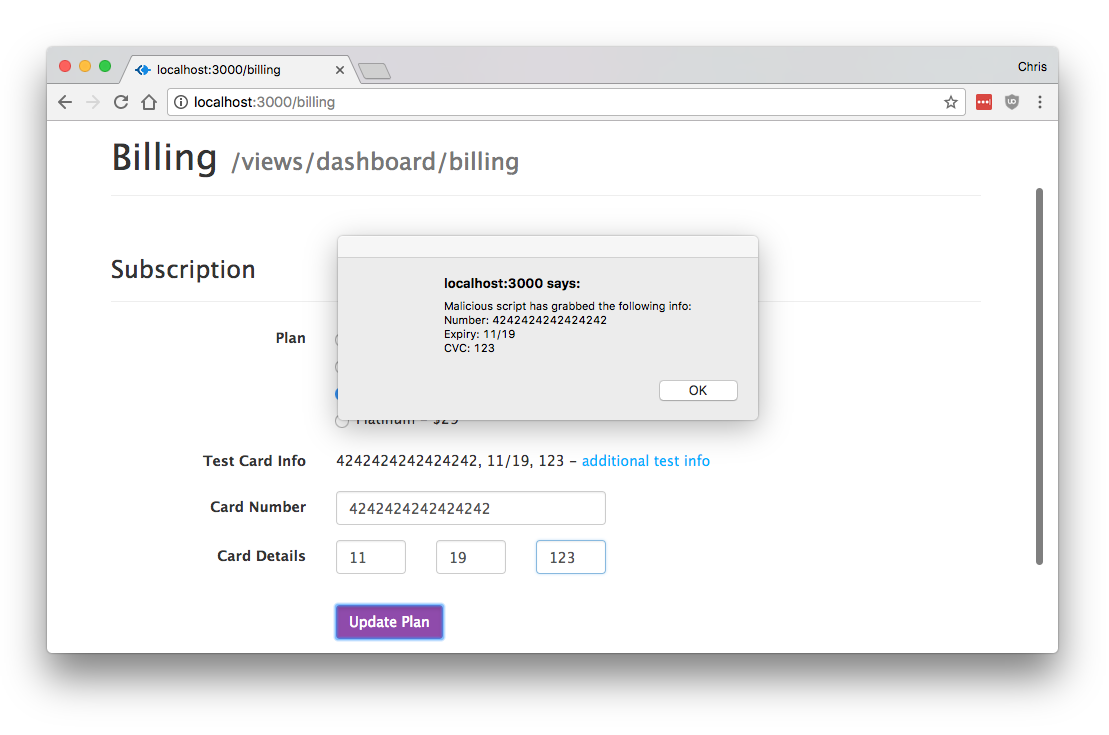 The payload uses a similar wrapping approach to replace the Stripe library’s token creation function. As mentioned, we just alert the user that we got their information, but this provides full XSS capabilities. This is done with the following:

For express, the number of trusted people is 51. For pm2, 129. I’ve seen some packages as high as 400. If any one of these users became malicious, or had their npm account compromised, they could perform this sort of attack against you. Download it and see how many users your app trusts.

It’s important to not “throw the baby out with the bath water”. The node module ecosystem allows developers to save time and effort by leveraging a massive open source community, and we shouldn’t discount the value of that. However, we shouldn’t wait for a exploit version of the left-pad problem before considering the security implications of importing unreviewed code.

Consider looking at the number of contributors involved in a tree before using a package, ask yourself if it makes sense to use that package at all, and be sure to use a security tool such as node security so that you’re aware of any security events in your dependencies.